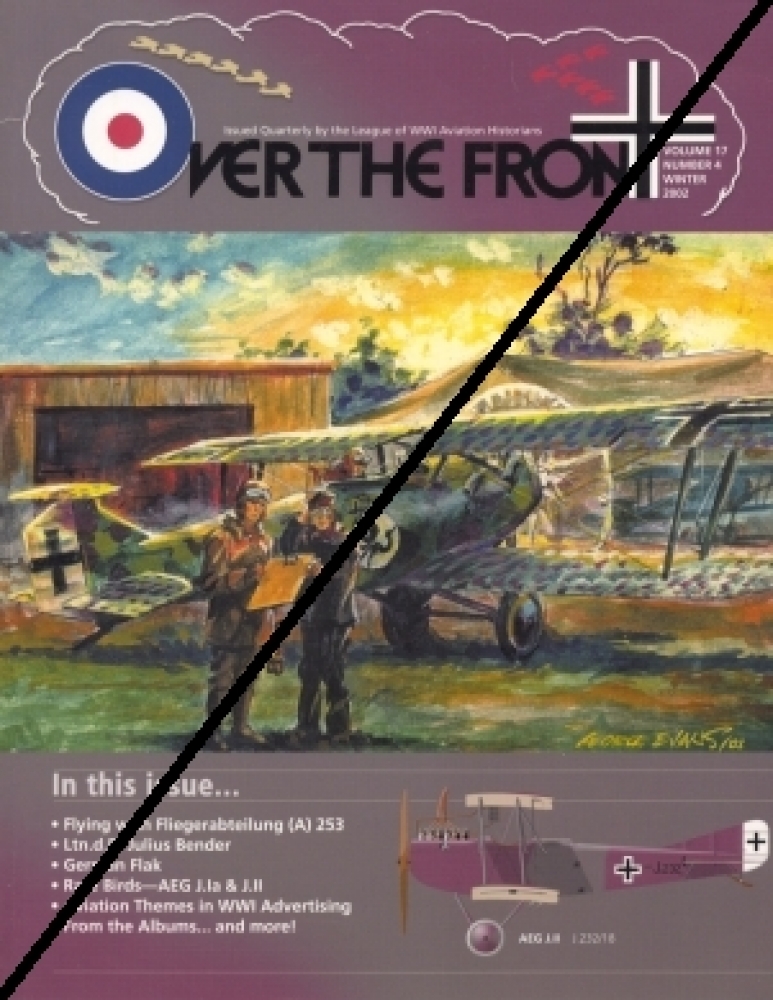 This issue is sold out. It is included for information purposes only.

"Last Minute Checks" by the late George R. Evans depicts Leutnant der Reserve Hanns-Gerd Rabe, an observer, looking at a map of the 6. Armee Sector to be reconnoitered before setting out in Hannover Cl.IIIa 2714/18 from Flieger-Abteilung (A) 253's airfield at Pont `a Marque, France in the summer of 1918. A young enlisted man steadies the map for Rabe with his left hand while hanging on to his cap with his right, as the pilot, Feldwebel Peter Johannnes prepares to climb into the cockpit of the aircraft, which bears Rabe's "Wandervogel" (bird of passage) personal marking.

Comments & Reminiscences, Flying as an Observer in Flieger-Abteilung (A) 253 by Hanns-Gerd Rabe
Rabe flew more than 160 combat missions. In this article he describes three of them as well as his views on the importance of the aerial observer during the the Great War.

Ltn. d.R. Julius Bender, A Badener in Jagdstaffeln 10 & 4 by Peter Kilduff
Julius Bender, a little known Bavarian pilot, collected photographs during his tours of duty with JG 1. Many of the photos are presented here for the first time. Appended to the photo essay is a personnel roster of Jagdstaffel 4.

German Flak in World War I by Gunnar Soderbaum & Dr. Hannes Tager
Nearly 15 percent of Allied aircraft shot down during the War were credited to German Flak units. Yet very little has been published in English regarding German anti-aircraft operations. This well reseached, well illustrated article will help fill the void.

Rare Birds: AEG. J.Ia & J.II by Peter M. Grosz
A short history of the AEG JIa and JII with 1/48 scale drawings by Martin Digmayer. In addition, the back cover of this issue is graced with profiles of the AEG J.II by Robert Pearson.

At a Dealer Near You... You Wish! by Aaron Weaver
Autos and planes; Mercedes and Benz; hand in hand in advertising.

From the Albums by Aaron Weaver
"League members generously submit photos on a regular basis... "

Between the Bookends:
Aviation Awards of Imperial Germany in World War One: And the Men Who Earned Them--Vol. VII | WWI Aero--The Journal of the Early Aeroplane (Nov. 2002)

Mentioned in Dispatches:
Aircraft Spotting | A Model Citizen | Phoney Photos | Hits and Myths | And Now for Something Different | Seydler Response | The Razor's Edge | Stewart Taylor Checks IN | Taylor on Unger