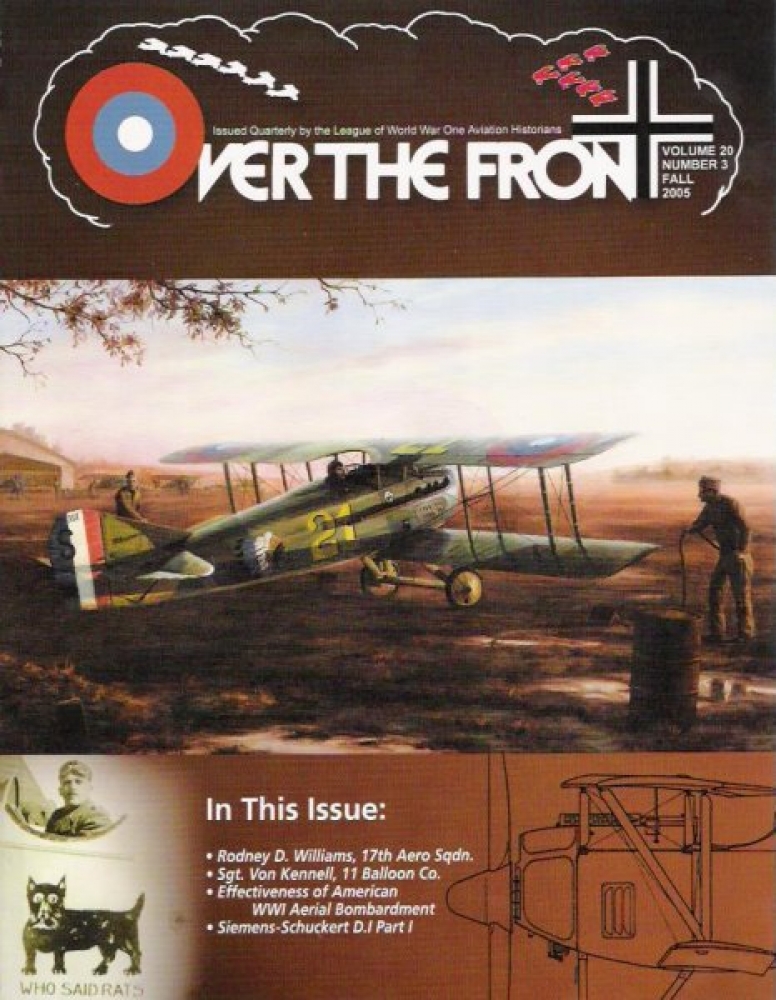 An Evening with Rodney D. Williams, 17th Aero Squadron (Transcript)
A memorable 1972 presentation by Mr. Williams to the Midwest Chapter of Cross and Cockade.

Sgt. William D. Von Kennell, 11th Balloon Co. First AAS by Dianna Golding
When William Von Kennell returned home in 1919 he was a changed man. "He was dissatisfied with the home he left left behind, disillusioned about why the war had to happen at all, and felt the need to share his thoughts ..."

Assessing the Effectiveness of American WWI Aerial Bombardment by Paul Berg, Lt. Col, USAF
The birth of American daytime bombing; the theory, the experience and the post-war analysis.

Three in One Day by Rudolf Windisch, Translated by O'Brien Browne

Between the Bookends:
Aviation Elite Units - 19: Jagdgeschwader Nr 11 - Geschwader 'Berthold' by Greg VanWyngarden | Aircraft of the Aces - 46: Austro-Hungarian Aces of World War I by Christopher Chant | Windsock Data File No. 111; Caproni Ca.4 by Gregory Alegi | Windsock International, Vol. 21, No. 3 | Cross and Cockade International Journal, Vol. 36, No. 2 | Cross and Cockade International Calendar for 2006 | The Little Field Marshal - A Life of Sir John French by Richard Holmes | Blindfold and Alone: British Military Executions in the Great War by Cathryn M. Corns | WW I Aero - The Journal of the Early Aeroplane, No. 188